There is one form of risk that transcends income levels, industries, and experience, while simultaneously affecting every business, sports team, club, or academic program in the same way. That factor is people.

A bad coach can lose a game, a poorly chosen club president can lead an organization down the wrong path, and a mis-hire can be a fatally toxic addition to what might otherwise be a fantastic business culture. As for the latter, we can all identify a time in our lives we worked with or managed, a toxic employee. This person slows productivity, creates tension in the office, and isn’t a right, “fit,” for the job. As a manager of one of these employees, you empirically understand the effect this employee is having on others, but what many managers don’t measure, or don’t know how to measure, is the dollar for dollar cost of this employee.

A major Society for Human Resources Management research study attempted to quantify this virulent addition to a business, with results that may make managers rethink their recruitment process.

The SHRM studied 488 firms who were in the process of hiring a low to mid-level employees, as well as 247 firms hiring an executive-level employee. The firms used a variety of processes to recruit candidates, with the top methods being employee referrals (90%), job boards (71%), and social media (61%) for mid-level candidates. For the executive search, most firms used networking events (61%), or executive search firms (49%).

From there, the SHRM looked at how the firms assessed candidates. Unsurprisingly, roughly 75% of firms used references to get an idea of a candidate’s true behaviour, while just over two-thirds used a one-on-one meeting with the candidate. Only about 25% of firms used a behavioural assessment to evaluate an employee, while an even lower 17% of firms utilized a cognitive assessment. So, with traditional methods of hiring still prevailing as the “go-to,” for most employers, how did these employees fare, and what was the cost? 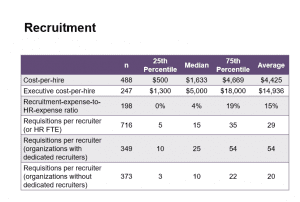 From these data points, the SHRM was able to average out the cost of a hire for mid-level, and executive-level employees. The numbers were staggering.

The average cost of a hire for a low to mid-level hire, something most companies do on an almost continual basis; $4,425. 25% of companies paid more than $4,650 per hire.

For firms that hire even two low to mid-level employees per year, this could mean close to $10,000 in hiring expenses, while hiring two executives could cost close to $30,000. This represents a major capital expenditure for some businesses, and a mis-hire could mean lost-abilities to pursue growth-related initiatives.

What happened to the employees? 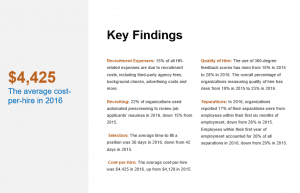 The SHRM followed up on the firms to see what happened with the employees, and how long the entire hiring process took. For 864 sperate hires, the average time to fill a job was 36 days. For 602 of those hires, 26% were gone within a year.

Translation: for the average firm hiring 10 people a year, this means $11,505 wasted on hiring the wrong person. To go further, that number doesn’t consider lost productivity during the 36 days, as well as stresses to the rest of the team that had to fill that position while the firm was hiring.

And so, if these traditional hiring methods lead to a 26% separation rate, and over $11,000 in direct costs, what alternative is there? Going back, 25% of firms said they used a behavioural assessment to screen a candidate. What type of results do firms see with that system?

Using the Predictive Index System™, as delivered by Predictive Success Corporation, businesses saw a decrease in mis-hires of 22%. For the business example used above, this would mean almost $10,000 in saved costs.